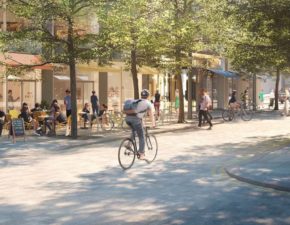 As Canary Wharf’s newest district, Wood Wharf has been designed to provide a new residential led, mixed use, waterside community defined by the quality of its public spaces and its exemplary architecture. The development will broaden and extend the Canary Wharf Estate, adding to its vibrancy and continually expanding its cultural, community and commercial aspects.

With such a large mixed-use area being created within the heart of Canary Wharf, the client was keen to ensure that the paving would be able to stand up to a variety of challenges. This included prevention of paver destabilisation through heavy footfall traffic, vehicular use and the prevention of sand loss through mechanical cleaning regimes.