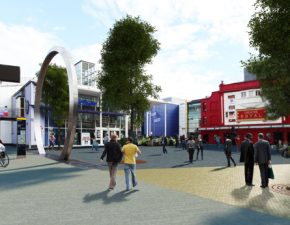 Based in the heart of East London, Stratford Centre is undergoing a £17.9 million Newham Council and Transport for London (TfL) regeneration. Under the plans, cycle lanes will be introduced, and pavements widened. Also planned are verdant public spaces with trees and plants to enable residents and shoppers to take a breather from inner-city living.

With the developments at Stratford Town Centre expected to bring around 26 million visitors a year, Newham Council required a sealer that would be able to stand heavy footfall traffic throughout the year, and throughout the entirety of the 24,000m² site.

With a high volume of eating and drinking establishments with the area, including bars, fast food stores and high-end eatery’s, Newham Council felt that stain protection was essential to help maintain the aesthetic appearance of the Granite Slabs.

Newham Council needed to only look across the River Thames to their neighbours in Greenwich to see the solution. Following over 10 years of success at The 02 Arena in London, Resiblock Resiecco has now been utilised at multiple sites across the Capital, including Pudding Mill Lane Tube Station, London Bridge Station and Wimbledon All-England Lawn & Tennis Club.

The success of Resiblock Resiecco at The 02 Arena, which has been trafficked by more than 80 million people since its re-development, across a 12,500m² site was a key factor in the decision by Newham Council and JB Riney of which sealer to use. With similar amounts of bars and restaurants to the Stratford area, The 02 Arena also demonstrates that Resiblock Resiecco provides resistance against food and drink stains.