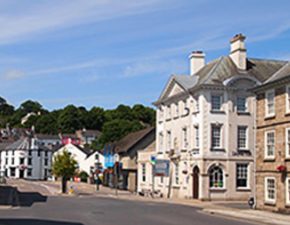 Okehampton was founded by the Saxons. The earliest written record of the settlement is from 980 A.D as “Ocmundtune”, meaning settlement by the Ockment, a river which runs through the town. The impressive tower of St James Chapel (15C) dominates the main street which in times gone by was the Old London Road lined with coaching inns which can still be seen today.

With the previous block paving coming to the end of its life-cycle, there were major concerns at Devon County Council that Okehampton Town Centre’s paving failure could lead to safety concerns. The failures had been caused by the changing face of local traffic, in which more and more Heavy-Duty vehicles were manoeuvring around Okehampton. As such, it was decided that the original blocks would be replaced, and that a sealer capable of preventing similar paving failures would be required.

Having been used at Bedford Square in Tavistock less than six months beforehand, Devon County Council were fully aware of the benefits of using Resiblock Sealers. With the use of the same Yorkstone pavers, although this time in the form of a block rather than a slab, it was quickly determined that Resiblock ‘22’ A.F would the recommended sealer for Okehampton. Providing prevention against paving failure, stain resistance and colour enhancement, Resiblock ‘22’ A.F gives Devon County Council the maintenance free paving they were searching for.