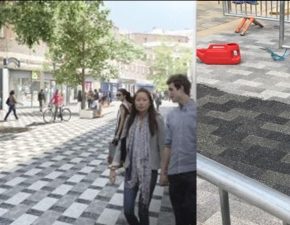 Following the success of initial developments on the High Street in 2012/13, Maidstone Borough Council invested a further 3 million in Week Street and Gabriel’s Hill/Lower Stone Street, down to the junction with Palace Avenue.

The designs draw upon the rich heritage of Maidstone and include squares at key junctions to link with side roads. For example, Iguanodon Square, at the junction with St Faith’s Street has been designed to link with Maidstone Museum. The council hope it will remind visitors that an Iguanodon skeleton was found in Maidstone.

With the hope of increased footfall traffic, Maidstone Borough Council were looking for a sealer that would be able to provide long-term protection against paver destabilisation. Furthermore, with an array of bars and restaurants lining the areas of Week Street and Gabriel’s Hill, protection against food and drink stains, as well residue stains left over by discarded chewing gum.