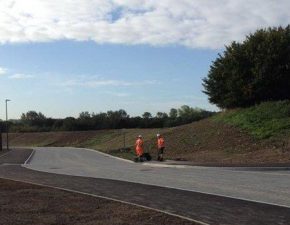 This London Road South site is the former home of Nortel and was the location for the invention in 1966 of the technology behind fibre optic cable. It has now been re-named Kao Park in honour of Sir Charles Kao who pioneered this work with George Hockham at STL, the precursor to Nortel.

One of the proposed developments on this site will comprise the creation of a 32,000 square metre data centre complex, which will offer independent and world class data capacity for local, national and international companies and organisations of all sizes and shapes. The scheme has the potential to place Harlow firmly on the map of locations with global data capability.

With the completion of the first stage of the development, the main access road, concern was expressed with regard to the erosion of jointing sand from the heavy duty traffic entering the development, which could lead to paver destabilisation and ultimately paving failure and associated increased maintenance costs.

Resiblock ‘22’ was specified, a one pack moisture cured specialist pre-polymer urethane jointing sand stabiliser which is also utilised on Aircraft Aprons to prevent jointing sand erosion from aircraft movement. The product when applied to the paving will stabilise the jointing sand preventing its erosion from trafficking, natural elements, wind, rain, etc., and manmade forces such as pressure washing and vacuum sweeping, providing effectively maintenance free paving.

Easy application, requires no specialist labour. It will inhibit weed and grass growth from the joint whilst providing a significant degree of stain protection. Once cured, it remains fully elastomeric thereby accommodating the small elastic deflections incorporated in the pavement design.