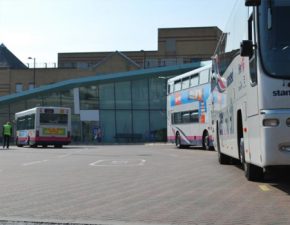 Southend-on-Sea, best known for having the longest pier in the world is served by three major bus stations with the regeneration of its Central Bus Station and paving having been completed in 2004.

Within 12 months of opening the channelized heavy duty trafficking resulted in significant rutting and deformation of the pavers.

The failed paving was reinstated, thereafter the entire area was treated with Resiblock ‘22’. Designed to stabilise the jointing sand within small element flexibly laid paving at aircraft aprons. Its simplistic application will prevent water and fuel infiltration via the joint whilst preventing sand erosion in turn promoting good interlock within the system, preventing paving failures i.e. rutting and deformation from heavy duty trafficking. Inspection of the site 5 years following application (April 2010) reveals zero sand loss from the paver joints, zero rutting or deformation.