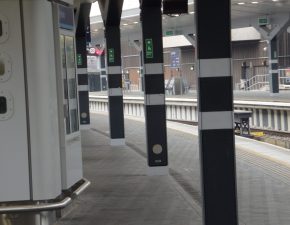 London Bridge railway station, built in the 1830s, is one of the oldest stations in the world. It is located south-east of London Bridge on the River Thames, near Tooley Street in London, and following completion of its latest redevelopment, it is now capable of handling 75 million people per year.

In 2011, Southwark Council approved redevelopment plans worth around £500m, as part of Network Rail plans for the £6bn Thameslink Programme. Following the completion of the Olympic Games, works started on London Bridge Station in the Summer of 2013.

It was anticipated by the client and main contractors that cleaning regimes would serve to remove the jointing sand, leading to the de-stabilisation of the paving that could lead to uneven ground (and an increased risk of slips, trips and falls).  In addition, the client required a product which would impact a degree of stain resistance to keep the paving looking neat and fresh.

Resiblock Resiecco was selected by the client and main contractor to bring about long-term stabilisation of the paving whilst significantly reducing staining by food and drink.

The previous success of Resiblock Resiecco at both The 02 Arena and Sir Matt Busby Way at Manchester United Football Club, where similar problems associated with the paving where major concerns, played a key role in the selection of this particular paving sealant.

Resiblock Technicians attended the site and advised on the correct application and spread rate of Resiblock Resiecco. The one coat application allowed the station to remain open during installation.

Resiblock first delivered the product in March of 2014, and provided further material in December 2014, August and November 2016, March and May 2017 and finally in October of 2017. London Bridge Station was re-opened in May 2018 by HRH Prince William.

With the use of a quality paving sealant, we were able to stabilise the sand filled joint notwithstanding cleaning regimes and trafficking. The sealant offers the following benefits: