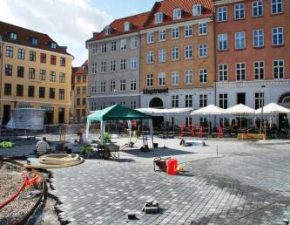 Strøget Copenhagen “The Walking Streets” created in 1962 saw the pedestrianisation of initially 15,800m² which has grown to an area of approximately 100,000m² forming Europe’s longest pedestrian shopping area with 250,000 pedestrians every day in the summer season. Copenhagen’s small element paving has traditionally had its joints topped with bitumen, but now viewed as unsightly.

On behalf of the Copenhagen Community, Polyform Architects chose to specify Chinese Granite Setts however; concern was expressed that without topping the joint with bitumen (the Danish traditional method) the jointing medium would be readily eroded through cleaning regimes, pressure washers, vacuum sweepers etc.

Via its Danish representatives Dansk Forseglings Teknik, Resiblock attended a number of meetings with Polyform culminating in live trials of Resiblock 22 in early 2010. It is understood that a number of alternative products from around Europe were trialled during the course of that year with Resiblock ultimately specified in February of 2011. Unlike its competition Resiblock demonstrates ease of application, superior cure rate and bond strength. Once cured it remains fully elastomeric thereby accommodating small elastic deflections with the paver pavement.