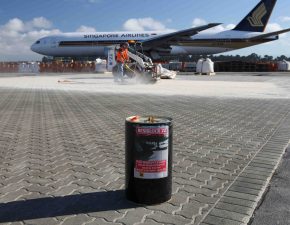 Coming into operation in 1998, Hong Kong International Airport, known colloquially as Chek Lap Kok Airport due to its location on the island of the same name, replaced Kai Tak Airport. It has now become the most important regional trans-shipment centre, passenger hub and gateway serving 45 destinations in Mainland China as well as the rest of Asia. The airport is also the world’s busiest cargo gateway having surpassed Memphis International Airport in 2010.

Following a ‘Report on the Condition of concrete block paving (CBP) at Hong Kong International Airport’ in 2002, it was noted that “severe distress to the structural integrity of some parts of the concrete block paving …was so severe that there was significant potential for Foreign Object Damage…to both airfield vehicles and personnel.” Therefore, a solution was required that would prevent sand erosion by jet thrust rotor down and other forces which are caused through aircraft movement.

Resiblock were able to demonstrate to Mr Willie Fung of Airport Authority Hong Kong, that the use of Resiblock ‘22’ would prevent sand erosion leading to paving failure from the above issues. As such, in 2003 Resiblock manufactured and shipped Resiblock ‘22’ sealer to seal around 35,000m² of paving at Hong Kong International Airport. In the 15-year partnership that has ensued since the first sealing works, Resiblock have provided annual sealing solutions to Hong Kong International Airport since 2010, and the latest sealing works has now taken the total area sealed to over 175,000m².

Applied as a liquid to the entire surface of the pavement, RESIBLOCK ’22’ is a specialist pre-polymer urethane sealer; designed to enhance and maintain structural integrity of flexibly laid small element paving. RESIBLOCK ’22’ prevented the erosion of jointing sand, whether that be the forces of jet engines, general trafficking, pressure washing or vacuum sweeping. The block paving sealant also helped to render the modular paving joints completely impervious to water (and hydrocarbons), thereby ensuring structural integrity for a long period of time.

Benefits at a Glance