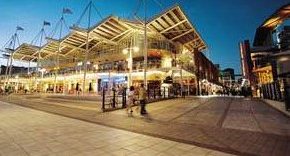 Constructed in the early part of the 21st Century, Gunwharf Quays Shopping Centre is located on the site which was once known as HM Gunwharf. HM Gunwharf one of several such facilities which were established around Britain and the Empire by the Board of Ordnance, where cannons, ammunition and other armaments were stored, repaired and serviced ready for use on land or at sea. The military site closed in 1995 and was reopened as Gunwharf Quays Shopping Centre in 2001 after six years of construction.

In 2018, works to extend the Plaza in Gunwharf Quays were completed using a mixture of both Granite Block Paving and Granite Slabs. The Client, Landsec, were looking for a sealer that would provide protection for both substrate of pavers, as well as sand stabilisation for the prevention of paving failure. They also hoped Resiblock would be able to provide a decorative product that would enhance the appearance of the paving.