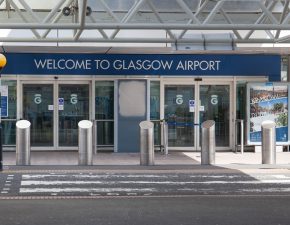 Originally a torpedo training base, Glasgow Airport was opened in 1966 to operate flights around the UK. Today, the airport sees around 8.5 million passengers travel through the airport, making it the second busiest airport in Scotland, behind Edinburgh, and the 9th busiest airport in the UK.

Glasgow Airport was originally treated in 2015, when an area of 7,800m² was sealed with Resiblock ‘22’. Resiblock had originally been specified for sealing works to protect concrete block paving from fuel infiltration and seal/stabilise the jointing sand, preventing sand erosion from aircraft movement. Since then, Resiblock ‘22’ has protected the paving and joints from a large increase in both passenger and flight numbers, with the airport peaking at 9.9 million passengers in 2017. In 2022, it was decided that an area of 1,400m² would require remedial works.

Glasgow Airport once again placed their trust in Resiblock and the Resiblock ‘22’ product. Having seen the sealer cope with an increase in traffic throughout the previous 7 years, the client were keen to ensure that Resiblock ‘22’ was utilised to protect the joints from aircraft movement once more, especially with an anticipated rise in the amount of flights coming through the airport in a post-covid world.