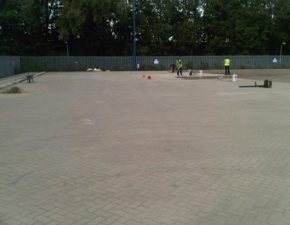 Maritime Transport Limited had significant problems with their paving at this site. So severe were the problems that work in the container yard had to be halted. Whilst the flexibly laid concrete block paving was suitable for purpose and could adequately deal with the constant and heavy trafficking in the yard, there was clearly an issue with jointing sand erosion. The extent of this sand loss was considerable and resulted in significant water infiltration to the sand bedding course and subsequent erosion. The heavy traffic loads exacerbated this with the trapped water leading to deformation of the paving.

Maritime Transport approached Rodgers Leask (Consulting Civil & Construction Engineers) with the brief to find a long-term solution to this problem and ensure the yard was operating again at the earliest opportunity. Rodgers Leask conducted a survey of the site and after assimilating their findings contacted Resiblock for help.

Having identified the underlying problem, Rodgers Leask, concluded that the application of a sand stabiliser and sealer would resolve the issue once the paving had been repaired and the joints re-sanded. Having reviewed the marketplace for suitable suppliers, they subsequently contacted Resiblock. Resiblock were able to demonstrate their significant experience in the sealing and stabilisation of small element flexibly laid paving. In particular the demonstration that the product has been extensively utilised for aircraft aprons and shown longevity of successful application resulted in the specification of Resiblock “22”.